Blue skies, high recreational value and a cosmopolitan culture all contribute to attract people from all over the world to Bavaria. They want to live and work here. At best in the games industry, a driver of growth in the digital economy.

The latest study “Games industry in Bavaria” confirms Bavaria’s attractiveness as a home for creative minds, founders and businessmen. Here 118 games companies already have their offices. More than 1500 employees generate a revenue of more than 560 million Euros. Many offers for networking, training and subsidies underline the quality of the location.

The homo ludens is a sociable creature and likes to share his passion for games with kindred spirits. For example at the GameCamp in Munich, the central meeting place for game developers, media students, culturally interested and the curious.

The GameCamp is a two day event of the Games/Bavaria. Always in spring, the GameCamp brings together hundreds of like-minded people. They share their enthusiasm for games, codes, sounds, text, graphics, design, culture. This is more like a happening than a congress, it feels fresh and modern. Yes, there are speakers and subjects. But the participants decide whom they want to listen to and whose brains they want to pick. Just as at the Games/Bavaria vernissage in the neighbourhood, where those interested in games can test new games and gaze in wonder at artworks on the screen. 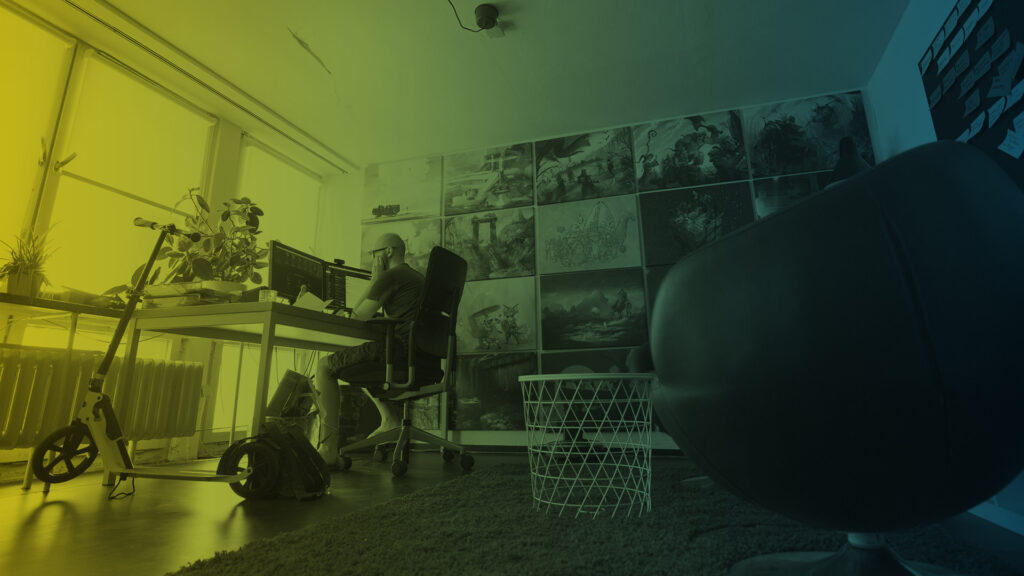 The meeting place for the games scene in Munich and region for in the evening. International guests and insiders go on stage and talk about subjects close to their hearts. In-depth insights and perspectives result from the subsequent Q&A rounds and discussions. Finally developers invite you to test their creations.

Talk & Dev is to be understood as an exchange platform for game developers, Talk & Play as a platform for exchanging ideas with a focus on cultural aspects. The hosts take care of pizza, drinks and topics of conversation. Talk & Play and Talk & Dev are a joint project from Games/Bavaria and is organised in partnership with Chris Wulf and sponsored by CipSoft from Regensburg based on the original idea from berlingamescene.com.

Nowhere in the world do more gamers meet year for year than at the leading trade fair gamescom in Cologne. This is where Bavaria’s game industry shows what it is capable of. For example at the joint Games/Bavaria stand. With support from the Bavarian State Chancellery trade visitors meet at the very popular breakfast reception, cultivate contacts in the beer garden and increase the visibility of their products by booking rooms and tables in the joint stand.

Games/Bavaria networks and supports creative professionals beyond the Bavarian borders. Partner of Games/Bavaria is, among others, the Ludicious Zürich Game Festival that takes place every year in January. Games/Bavaria organises the trip to Switzerland for an exciting mixture of students, industry experts and newcomers. There they have the opportunity to meet international speakers, to present projects and to position their company within the scope of the Ludicious Business Accelerators.

Games/Bavaria should strengthen the region and give more international visibility and relevance. As a result of divers measures in the are of networking and subsidies Games/Bavaria’s Partners strengthen the whole games ecosystem.

Since Games/Bavaria is a brand and not an explicit institution, all the partners that work for the brand are behind it. The two positions in the WERK1, Robin Hartmann and Robin Kocaurek, are mainly responsible for the day-to-day business such as the newsletter, the website and the organisation of divers events and trade fairs.

I would like to work in the games sector. Where can I inform myself about the market and job opportunities?

For Bavaria we have our own Jobboard on the website! In the addition the company register can be used for employment enquiries. Essentially our events are a good starting point for persons and companies to get to know the industry.

I am a designer/producer/coder/artist and would like to work in Bavaria. Do you make contact with studios and can you convey apartments?

Generally we are pleased to help you find a job. At this point we refer to our Jobboard. The employers do, under certain circumstances, help find an apartment, we are not allowed to and cannot make such an offer.

I’m planning to start a games studio in Bavaria. Do you make contacts with banks, investors, Business Angels and funding institutions?

Gladly! We are glad to be the first point of contact, however, for subsidies we recommend contacting the FFF Bayern. This where the state of Bavaria’s games funding is located. The EU funding possibilities within the scope of the Creative Europe Media are also interesting.

I would like to get to know people from the games scene. Where can I do that?

Our event calendar offers a large overview of almost all events in Bavaria. In addition the Meetups respectively digital meeting places Facebook groups and divers Discords are good places to get to know new people from the games sector in the region.

I would like to keep up to date on the latest news in Bavaria’s games scene. Do you have a newsletter?

There is indeed a Newsletter! There we consolidate monthly the most important dates, events and outlooks. We are always have to receive contributions and suggested topics. Following our Facebook page and us on Twitter also helps.

The monthly (german) Newsletter for the Bavarian games industry.